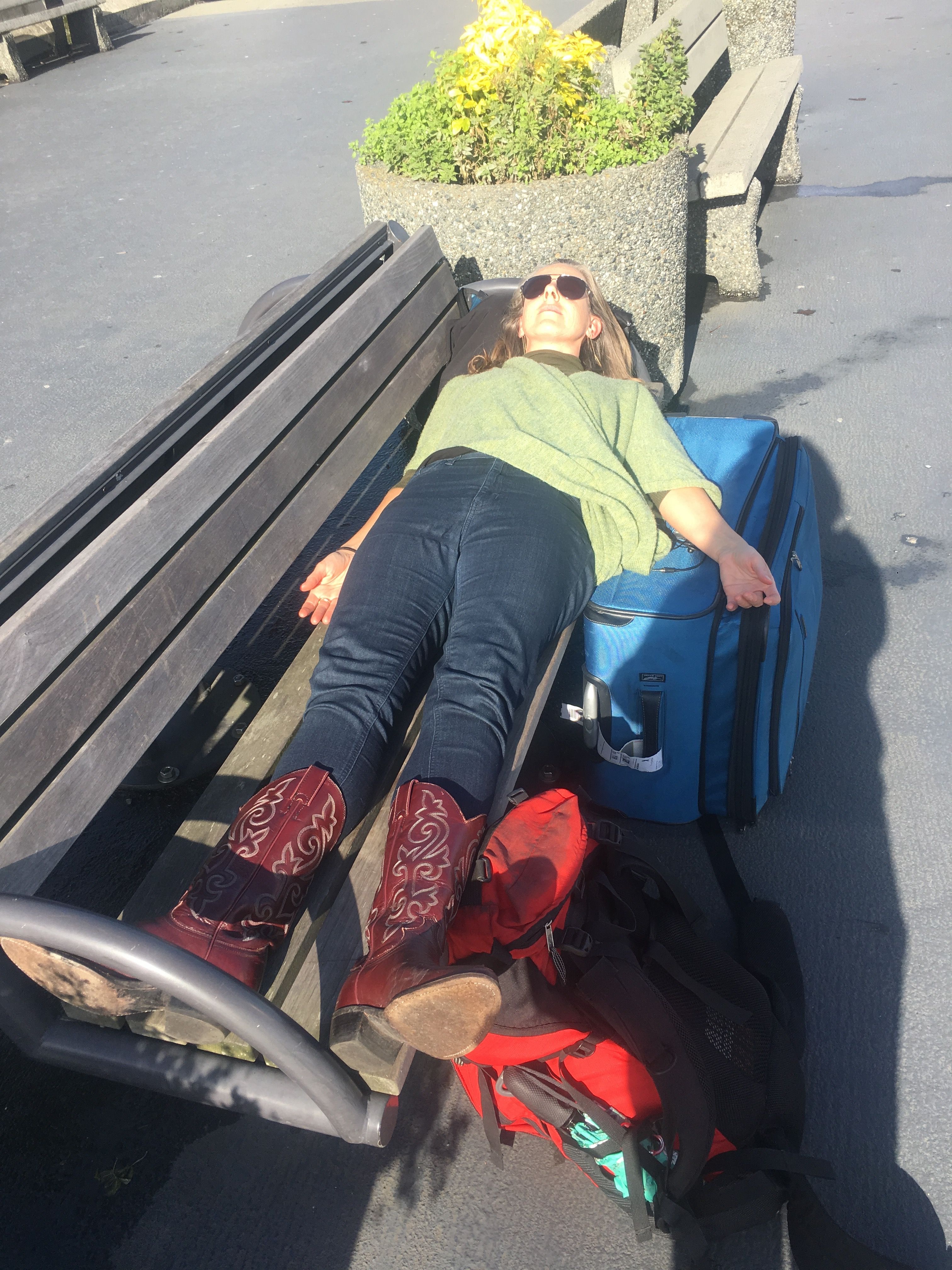 Yoga nidra sesh while waiting for the ferry in Swartz Bay

So many of you know that I’ve been touting the benefits of yoga nidra for several years. My friend Jaya Leigh introduced it to me ages ago and I’ve been practicing it diligently, especially since I started to heal my adrenal fatigue issues. Yoga nidra is otherwise known as “sleep yoga," and come on, who doesn’t want to have a little more sleep in their lives? Particularly those of us who have babies and are completely sleep deprived?

And so, I have a couple of downloaded versions on my phone in my music library that are my go-tos when I’m travelling (which is a lot of the time). One of my faves is Karen Brody’s rest meditation/yoga nidra recording from her book “Daring to Rest” . I read her book last year and followed her 40-day program which included three different yoga nidra practices, each building upon each other, and culminating with a sense of DEEP and PROFOUND rest. I felt amazing. The yogis say that doing a 20-minute yoga nidra session is equivalent to having a one-hour deep sleep. The brain waves that are activated during a yoga nidra session are the ones that slow our brain activity down. In the day to day, we access our beta waves, and that allows us to talk, drive cars, and fulfil our regular daily tasks. When we do a yoga nidra session, we access the alpha waves, and often the theta waves. In this place and space, there is less thinking and more rest.

I’ve been known to do yoga nidra sessions in various places: airports, ferry terminals, park benches, friends’ couches, the back of my car, hammocks, beaches and other public places. All I need to do is find a place to lie down and put my headphones on.

Several years ago I introduced my dad to the practice when we were in Invermere BC skiing. We were staying at a friends’ place and they have two awesome (and very busy)! kids. Since I don’t have kids, and Dad is old and lives solo, we were pretty pooped with all of the hustle and bustle of the household. Plus, we’d skied our butts off all day, so we were exhausted. We excused ourselves from the carnival (which is their living room) and shut ourselves into the spare bedroom for 20 minutes. After our session (we listened to Liz Hill’s practice) on YouTube, we emerged from our yoga nidra nap rested and replenished, ready to take on the rest of the day. Dad was amazed at how much energy he had, and how calm he felt at the same time, “What the hell was that? I gotta get that and do it at home.” I told him he’d need a) internet and/or b) a stereo system. Since he’s allergic to computers and doesn’t like technology, and his stereo only plays FM stations, this would be challenging for him. And so, he only does the practice when we are together.
For those of you who know my dad, you know that he is, well, how shall I say this? Gruff. Rough around the edges. A Barrie boy through and through. His ex-wife had a chip truck called “Grumpy Mike’s” with his face on the side of the truck. Everyone who knows him knows this about him. He makes me laugh constantly with his grumpy comments and mannerisms, because underneath, he is a softy, with a huge capacity for generosity (he let a homeless man stay in his storage unit for years, and would often feed him) and love. I’ve posted many-a-story about Dad, and his unique and comical mannerisms in the past. He’s like the character of the father in A Christmas Story, particularly in the scenes where he’s fixing the furnace (Dad was a furnace and air-conditioning guy by trade) and you can only hear muffled sounds emanating from the basement (cursing and swearing). Every sentence Dad utters usually has the word “Christ” in it, and although he’s a Catholic, he’s not using his saviour’s name in reverence or prayer most of the time.

Yesterday’s yoga nidra session with him should have been a Seinfeld episode. Here’s what went down:
Dad was laying on the bed and I put my portable speaker next to his head between the pillows while I set up my computer on my desk. I guess the last time I used the speaker I was rockin’ out pretty hard because I left the volume on full tilt. When I pressed play, Jodi’s voice boomed, “Close your eyes.  Begin to feel yourself moving back from your everyday life....” and Dad, in his state of being startled by the volume shouted, “Christ! That’s fucking loud!”. Not off to a good start for tapping into the parasympathetic nervous system (the part of the nervous system that says, “Slow down.”) After adjusting the volume, I lay beside him on the bed and told him he should have his palms facing upwards towards the ceiling. With that, I gently took his hand and flipped it over, as I would when teaching a class. What was different in this scenario however, was that my students are usually in their 30s-50s and don’t have severe arthritis. When I flipped Dad’s hand over he shrieked, “Ow! Fuck! What are you doing?! My hands are sore!” Setting the scene was progressively going from bad to worse. After finally adjusting the volume to a peaceful level, and then getting him comfy and relaxed, I lay down and got myself comfy. It took me a few minutes to get into the meditation because I had a serious case of the giggles due to the schmozzle of starting the thing. After a few minutes, we were both super relaxed, and the sides of both of our hands were touching. This almost made me weep. In addition to being grumpy, Dad is not the most demonstrative person I’ve ever met. He’s not a big hugger per se (getting better in later years due to my insistence), so the fact he was comfortable almost holding hands was a big deal.

After our session, we both felt much more relaxed and grounded, and I noticed he was a lot more present for the remainder of the evening. More inquisitive about me. Less grumpy. Now, if only I could get a yoga nidra recording to be broadcast from an AM radio station.