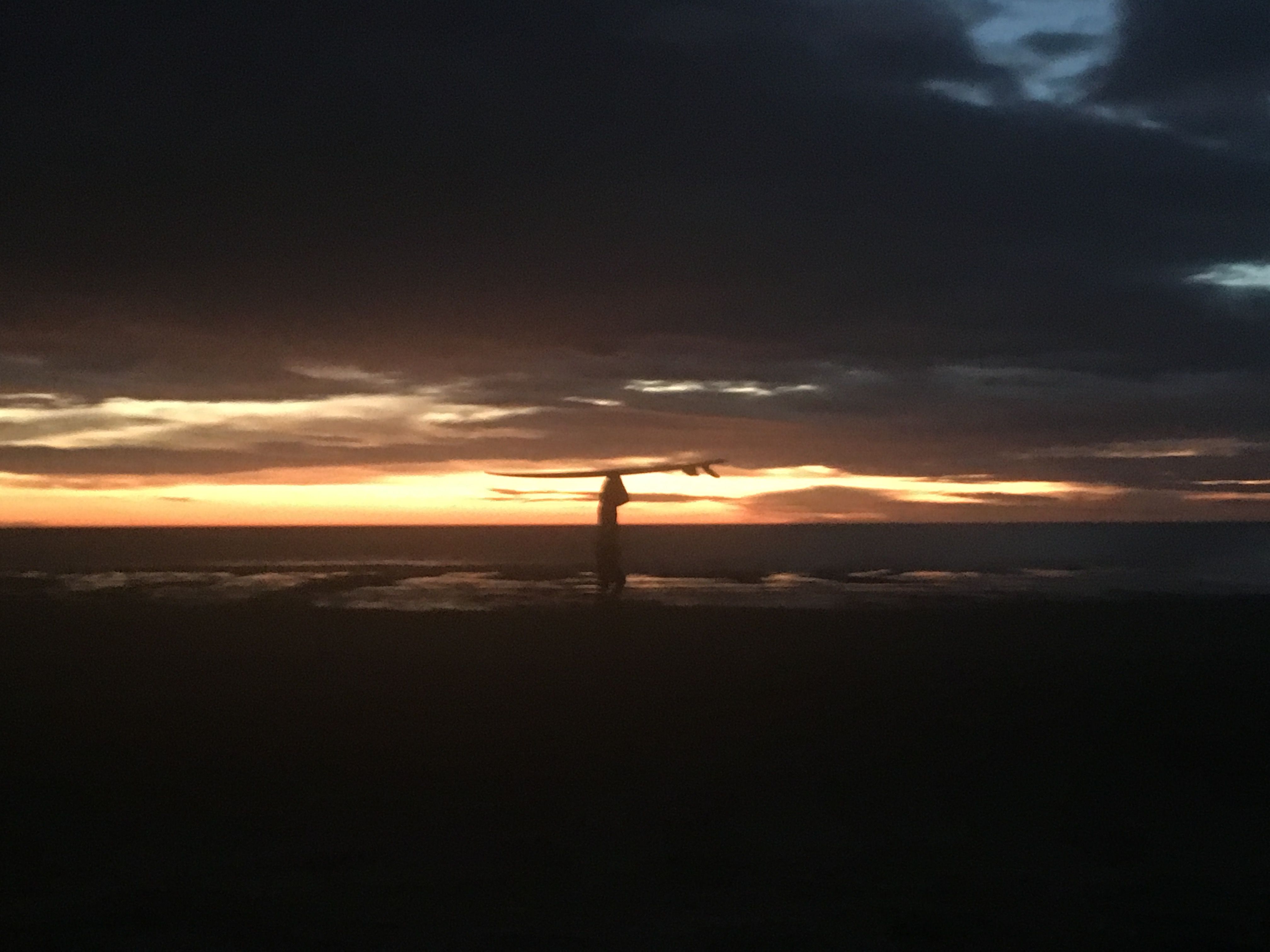 Floating around on waves in the ocean has been known to induce many insights and encourage life-changing epiphanies. This raw connection to the elements brings us into close relationship with the environment, and ourselves. Some may ponder life’s fleetingness and the sense of groundlessness. Some Buddhists have been known to see the correlation between waves and thoughts, and how they come and go. Perhaps not as deep and profound as those who have thought before me, I too had a  revelation in seeing the myriad of similarities between surfing and dating.

Based on Ometepe Island in Nicaragua for half the year, I’m used to being on the lake and doing lake things like swimming, paddle boarding, kayaking, and the odd synchronized swim routine for friends when I’m feeling sassy. I do however go off island several times a year to catch some waves in Popoyo and Maderas on the western coastline of the country. It was there in Popoyo last week that my “a-ha!” realization came.

Due to the fact that I almost never date, and the same can be said about my surfing hobby in relation to real surfers, this is clearly a given similarity. But the connection between both activities runs deeper than that. The most obvious for me is that both surfing and dating induce a mild state of fear. I’ve had enough near drownings with my surfing days in Costa Rica to know that you don’t mess around with Mama Ocean. The first time I surfed was more than twenty years ago, and due to my youth, naiveté, and cockiness in believing that I was an athlete, I made the mistake of surfing in Playa Hermosa, south of Jaco, on a super big day.  One wave totally trashed me and left me feeling like I was in a washing machine with the level set for heavily soiled clothing, for about an hour. In reality, it was probably more like two minutes, but it was the longest minute of my life. And one of the scariest. Once I was washed up on the beach, I took some verbal abuse from my fellow surfers (rightly so!) and scampered away with my tail between my legs, vowing to not make the same mistake again and to find a beginner beach.

The same can be said for dating in the sense of being fear-provoking. I’ve had a few dates that went on for perhaps an hour or so, and yet, they felt like a week: “Will this guy ever shut the fuck up and stop talking about himself? Will he ever and ask me a question?! Does he know that going into every mechanical detail about a specific piece of farm equipment is generally not that interesting?” And then I’ve had an experience with criminals, which is also scary. I met a dude on a surf trip years ago in Hawaii, and apparently after one rendez-vous under the stars one evening, he’d fallen in love with me. I was open (okay, maybe a bit desperate) so decided to give it a go upon returning to my home in British Columbia, Canada. After him not showing up for a date we had planned in the state of Washington, (I even crossed the border for this guy!) I googled his name to see if he may have been in an accident en route to our chosen spot. It was then that I saw all of his mug shots for various arrests, including spousal assault and carrying a concealed weapon. It now made perfect sense why he wanted to meet in the States. He couldn’t cross the border. I dodged a bullet there. Probably literally. I vowed in that moment be more discerning with dating, and to do some research in the future; I would not make the same mistake. Similarly if I’d had done some research all those years ago in Costa Rica about the waves in Playa Hermosa, I would have realized that they were way out of my league. Discernment is a virtue.

My session out on the water the other day was also like dating in terms of waiting. Waiting to catch that perfect wave, and in the dating world, waiting to find the perfect guy (one should note that I am currently forty-six and the longest relationship I’ve had is 2 years). As I straddled the board (uh, no, I’m not going into any of those comparisons folks. I’m a classy broad) and looked out to the sea, I kept my eyes on any potential waves that would be appropriate for my skill set. Basically, giving my environment the once-over. It reminded me of being at a festival or gathering whereby I’ll let my eyes wander about, sussing out the potential man situation. A few times I’d see a wave or two coming in and think, “Is this the one? Could this be the one?” and then against my better judgement (and often impatience after having waited for a long time), I’d paddle, paddle, paddle, only to find that the wave was actually mediocre, and if I’d had waited another couple of minutes, the waves following that wave were actually much better in terms of shape and form. I’ve seen this lack of patience before with finding men too. In my gut, I always know when a man is right for me, but since my love life much of the time can be compared to the rains in the Sahara, I sometimes forget my gut voice and try him out anyway, drinking from the pool of mediocrity, only to end up feeling disappointed. During that dreadful date with the less-than-stimulating conversation about farm equipment, who knows if my true prince was somewhere else? He could have been waiting to find me and wanting to talk about George Martin’s influence on the Beatles, or the waves in Popoyo. The moral of the story here both on land and in the sea is: patience.

The question is: is there really  a perfect wave or perfect partner? On the flip-side, sometimes I can miss a really great wave or really great dude waiting for the more perfect wave or more perfect dude that actually never comes along. It’s a fine line. That being said, I’ve also noticed that when one great wave comes along, a whole set of them accompanies. From seeming nothingness, and eons of waiting, here comes seven, at the same time, so take your pick! Which wave to choose?! It’s the same with potential love too. For ages there is nothing, and I start to consider becoming a lesbian again (you know what I mean lesbian friends...I don’t want to get into the being born a certain way argument!) , and then all of a sudden: voila! Seven guys knocking down my door and now I have to choose. Decision making not one of my strong points, this can often be overwhelming. Mostly, very few dates actually work out, and then I’m back to the whole contemplating becoming a Buddhist nun thing again. That’s usually when my friends chime in to assure me there are plenty more fish in the sea. And many more waves to catch as well.